Heat flux sensors are simple devices that can be used to measure heat flux in discrete locations. The sensors are unique because they are very thin and provide minimal perturbations to the flow of heat. They require no special wiring, reference junctions or special signal conditioning. The accuracy of the measurement with these devices is optimized by proper installation and the ability to adequately couple the sensor to the materials surrounding it as well as to any prevailing thermal conditions such as convection currents. 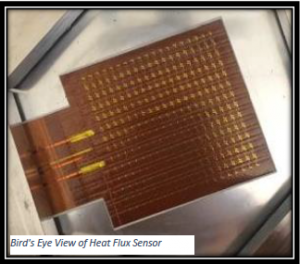 The ease of installation makes the use of these sensors in a freeze dryer almost unlimited since the thin and flexible sensors can be attached to either flat or curved surfaces and permanently bonded in place with conventional adhesives or epoxies.

Heat flux measurement provides insight into heat transfer events that take place during each of the phase of freeze drying including; freezing, primary drying, and secondary drying. Since the devices are mounted in-situ, continuous monitoring of the process can be performed.

With heat flow data all of the critical process parameters can be determined. For example, the thermal conductivity of the vial (Kv) can be directly measured when thermocouples are placed on the shelf surface and in the product. This eliminates the need to calculate Kv and any assumptions that are made during that calculation process. Other critical process parameters which can be determined include mass flow, cake resistance, and process progress.

A unique feature of using a heat flux sensor is the ability to determine the product temperature during primary drying without the use of a thermocouple when the vial thermal conductivity is known. As studies continue on the use of heat flux sensors this approach may eliminate the need for using temperature sensors in production dryers and thus reduce the clean room bioburden. Heat flux sensors can be added to any freeze dryer.

Heat flux sensors are currently used to evaluate the freeze drying process in the lab and can be used to characterize both laboratory and production freeze dryers to simplify protocol transfer.

Since heat flux sensors provide continuous process measurement they can be used as a process analytical technology and incorporated into the control system for cycle optimization and control.

Patent: 9121637 Marketed by Millrock Technology as AccuFlux and is available as part of the LyoPAT and LyoPAT II product offering